Time for a free map! I love drawing maps for Dungeons & Dragons adventures. I have far too many, though, so I give away my old school hand-drawn maps any chance I get.

The Bandits of the Murkmire prey on small villages on the periphery of the swamp. Your party has been hired to take them out at all costs and return any kidnapped villagers. Unfortunately, you’re caught attempting to sneak up on them, held in the dungeon below and are forced to fight in vicious pit fights against all kinds of unsavoury creatures. Time to escape! But what lurks behind the bricked up passageways? You can hear something moaning at night, putting both bandits and the kidnapped on edge. And that incessant tapping on the wall – is that something trying to get out?

This map is free to use for non-commercial purposes, as long as you acknowledge me and my website stevestillstanding.com. If you want to use it commercially, please send me an email and we can talk terms. 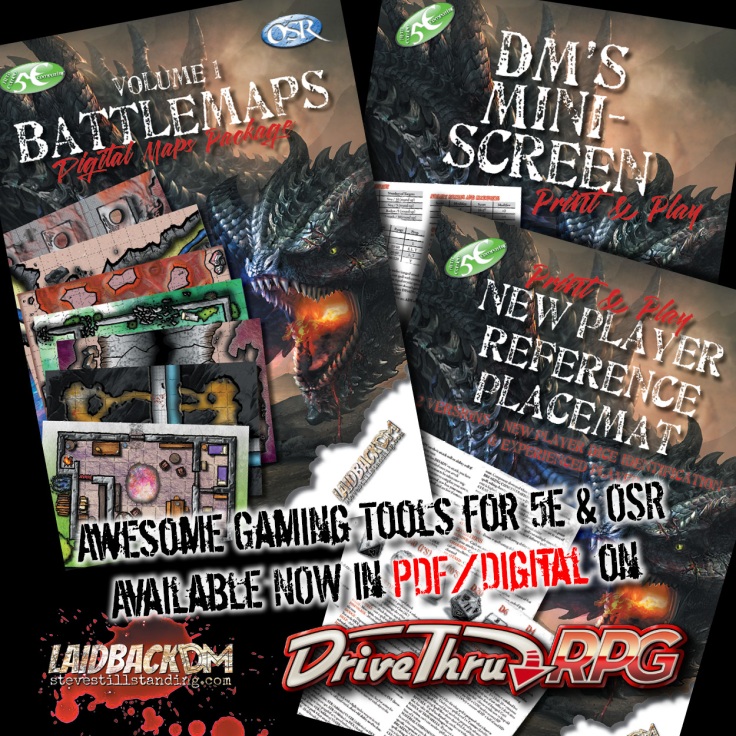 It’s been a while since I gave away a free map. So, without further ado! Okay, just a little…

I love drawing maps for Dungeons & Dragons adventures. I have far too many, though, so I give away my hand-drawn maps any chance I get.

Okay, it needs a better name than that, but I’m sure you’ll think of something! The PCs enter from the left, via a vertical cave shaft. Then its down, down, down, as the caves and ledges drop them lower and lower to where some dark and dangerous beasties dwell… This map is free to use for non-commercial purposes, as long as you acknowledge me and my website stevestillstanding.com. If you want to use it commercially, please send me an email and we can talk terms.

I went a bit crazy and bought all of the Pathfinder 2e products currently available. Here’s a short review of some of them.

A strong, 4-panel GM screen with great art and useful tables and reminders: conditions, actions, DCs, death and dying, monster types, etc. P2 is a rules-heavy system, and every GM is going to need some sort of support aid to help them remember everything. I think this screen should have included a separate insert with armor, weapons and inventory items listed on it. I find I use these things with players all the time and so made my own, but including them as reference sheets with the GM screen would have been ideal. 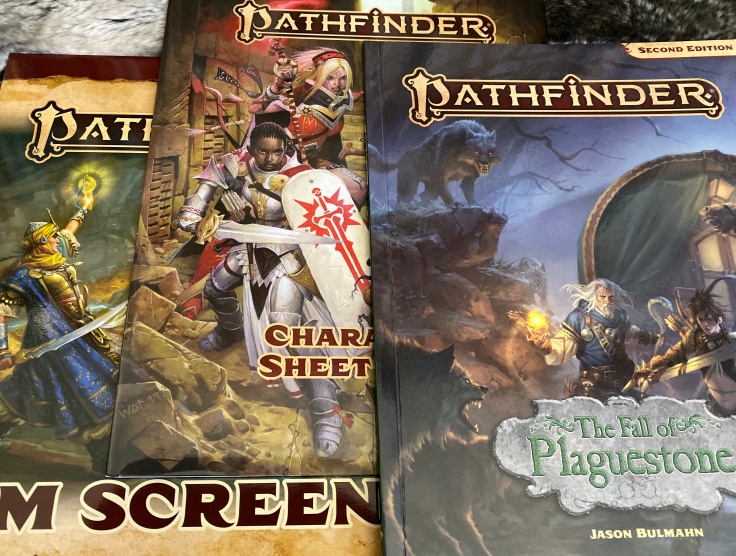 P2 has a pretty complex character sheet. The sheets in this pack have been individualised by class, with a breakdown of specific class feats on the back of the sheet, but they’re still very busy and you will need multiple sheets to keep track of everything (high level characters would be a bit of a nightmare, I imagine). There’s also a handy cheat chart attached to the folder with conditions and actions listed.

A cool one-off adventure with a straightforward murder mystery, lots of role playing opportunities, and a few fairly linear dungeon crawls with a great villain and motive. A handy toolbox for GMs at the end of the adventure includes new backgrounds, magic items, monsters and side quests. A very good introductory adventure for beginners and those GMs considering investing in the P2 Adventure Path campaigns.

I was sooooooo looking forward to getting this adventure. But like so many things in life, the experience didn’t quite live up to the expectation. I’m not going to explain the storyline—by now you would have read the advertising blurb.

Descent into Avernus is a campaign adventure for characters levels 1-13. It has great art, decent writing and a huge amount of campaign information for DMs who want to use Baldurs Gate as a city setting. And then there’s a somewhat short adventure in the city which then continues in Hell which kind of feels like it was tacked on, despite the fact it leads the book and has been hyped to death.

Don’t get me wrong—there’s much to enjoy about Descent into Avernus. Although it’s very linear (yes, that includes the sandbox-style section on Avernus), it has some great ideas and plenty of opportunities for DMs to improvise. Once the players are in Avernus, however, the resolution of the storyline is tied to very specific story paths and an annoying NPC (Lulu the hollyphant) that I can just see my players killing in the first few minutes. (Oh, don’t worry. She’s so essential to the story that she comes back to life later if she’s killed.)

I’ve been asking for monster stat blocks to be included in the main text of adventures for ages (but who’s going to listen to me?). And finally, some blocks are included, with the rest at the back of the book, as usual. But the brevity of the main campaign leads me to believe this decision was more a text padding choice than a specific design one.

I guess what I object to is paying $60 AU for a book that purports to be a full campaign, and ending up with something that may need a fair bit of additional fleshing out by the DM. Each Avernus-based mini-adventure is incredibly brief. The story plot points and quests are so closely connected that Descent feels railroaded. The overall campaign itself is decidedly shorter than any other WOTC has put out. In fact, it looks like it was designed this way to allow community content from DMs Guild to fill the gaps.

And the Mad Max-style vehicle combat and rules that were promoted so much? Well, let’s just say they’re a bit underwhelming. I guess you can homebrew a bit. Or a lot. Or buy lots of DMs Guild supplements. Either way, this adventure feels a lot like a computer game release with DLC to come. All we need now are micro transactions…

As I said previously, the swathe of information on Baldurs Gate (including random encounters, adventure seeds, backgrounds and group secrets/motivations) is great for DMs, but it’s not required to run the main adventure. So, if you’re wanting to run a homebrew campaign with Baldurs Gate as the hub, you have everything you need right here.

Opinion: While Curse of Strahd retains the WOTC campaign crown, Descent is at least better than Princes of the Apocalypse and the Baldurs Gate material is fantastic, even if it’s not required to play the adventure. 7.5/10

I know what you’re going to say—in D&D it’s so much easier not to have to worry about weapons getting damaged. But what happens when they do? And how do you have a simple (or laidback, as I prefer to call it) system that doesn’t bog down the game?

Here’s my personal take on weapon and armor damage:

And now you’re going to say, why not just buy a new one? That’s entirely possible, but not every PC may have the money, and it may be the sword is a family heirloom or that shield is the Cleric’s holy symbol. Or the player might just prefer to be self sufficient.

And remember: monsters with weapons and armor should be affected, too. All’s fair, after all.

I was one of the winners of the 2019 One Page Dungeon competition at https://www.dungeoncontest.com.

I used one of my old adventures from Shotglass Adventures volume 1, which is available in print and PDF from DrivethruRPG (see the link below).

Here’s a copy of the adventure I submitted, which you can download by right clicking and saving. I had to change the name of the major monster because of the system-neutral guidelines of the competition, but it’s an Invisible Stalker. All the other monsters are in the D&D 5e MM. 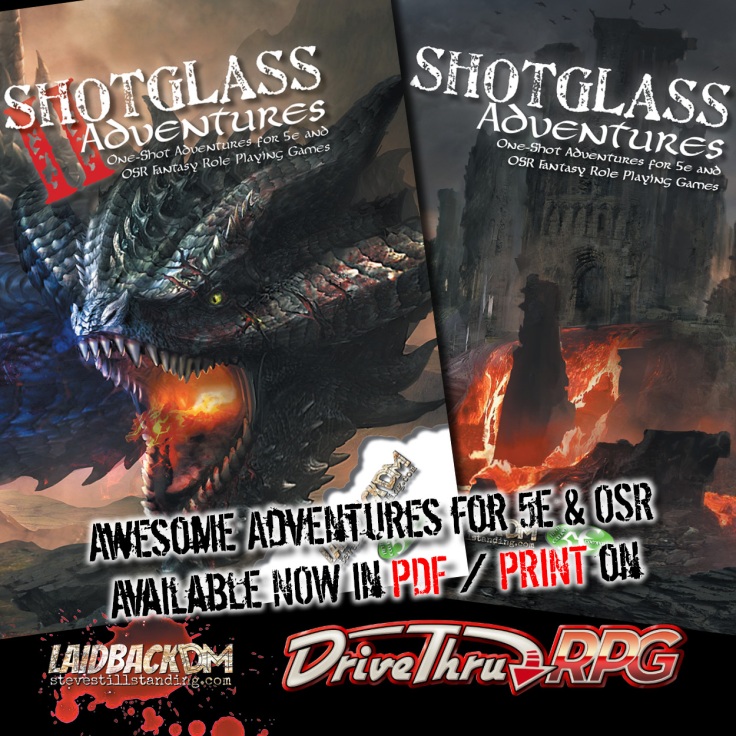 I bought copies of the Pathfinder 2nd edition Core Rulebook and Bestiary the other week, and after a solid read (they are over 600 and 200 pages respectively) here are my thoughts on the game.

I haven’t had the chance to run a game yet, but I can imagine my maths-deficient players getting their calculators out. Some of the systems are better designed than D&D 5e, while others just make things far more laborious. There is a level of specificity in the rules that eliminates a lot of uncertainty common in other RPGs. I imagine Pathfinder 2e games will take longer to run then D&D 5e. I like it, though!

Good on you, Paizo—a great update that finally sets Pathfinder apart from D&D, and in many good ways.

PS I’m not bagging D&D 5e – I love the game and play it every week. Heck, it’s how I make my living. Given Pathfinder 2e’s roots, though, it was easiest to compare.

Do you use the encumbrance rules as written in 5e? I don’t. I find them…cumbersome, if you’ll excuse the pun. Of all the rules brought across from the various old editions, counting weight in pounds and applying it to a factor multiplied by strength is just tedious. There’s enough math in the game without that as well.

So, time for some simpler rules. Here’s some, borrowed and slightly modified, from a great little game recently launched on Kickstarter, called Five Torches Deep.

All item weights are expressed as Load, which reflects the weight and bulk of an item. Small items and weapons (such as a dagger) weigh 1, medium or bulky items and large weapons weigh 2. Light armour weighs 1, medium armour 2, heavy armour 4. 500 coins equals a load of 1. Some items will have negligible weight, such as a single scroll, and don’t count towards Load (although a scroll case with multiple scrolls would weigh 1).

A PC can carry their Strength value in Load e.g. STR 18 = 18 points of Load. If they go over their limit, they are encumbered and suffer a 5 foot movement penalty per point of load over their Strength. They also suffer Disadvantage on ability checks, saves and attacks. When their movement reaches zero they are over-encumbered and can’t move. They’ll have to shed something.

Easy to work out and apply, right? And much less cumbersome.

Alignments are a leftover from the days of old school role playing. Originally there were three—Lawful, Neutral and Chaotic. Then Mr. Gygax decided in AD&D that he’d spice it up a little by adding Good, Neutral and Evil suffixes to provide a bit more clarity. But are alignments necessary in a D&D game?

Players and DMs generally fall into two categories when it comes to alignments—you either love them or hate them. There doesn’t seem to be a sit-on-the-fence (or neutral!) option here. Personally, I don’t like alignments. I think players like the freedom to play their character how they wish, and alignments are just not that important in running the game.

That’s not to say alignments are a complete write off:

In the end, everyone has good and bad in them. Nothing is black and white in the real world, and role playing games are a bit like that, too (at least mine are). I don’t believe in the need for alignments, but I can see how they can be useful in helping to guide a player’s ethical decisions. When I’m playing an NPC or monster, I ignore alignment altogether and do whatever fits the story best.

In the end, whether you use alignments or not, you decide how they work in your campaign. Like many of the peripheral rules in TRPGs (i.e. rules that could be considered non-essential) they don’t really make much difference to how the game is played. Everyone will still have fun, whether you use them or not.

And that’s what the game’s really about.