A friend of mine loaned me John Green’s The Fault in Our Stars, the mega-selling young adult novel about two teenagers in cancer remission who fall in love. “You’ll need some tissues,” she said, and she wasn’t wrong. This book brought me close to tears on a number of occasions. 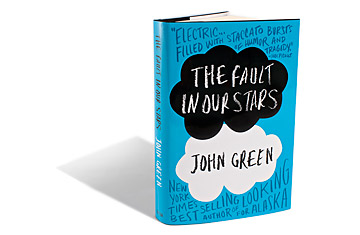 The Fault in Our Stars is about 16-year old Hazel, a far too smart and interminably sassy girl permanently attached to an oxygen tank since her thyroid and lungs were attacked by cancer. She’s on an experimental drug which prevents her tumours from growing, but like many victims of the disease, she is somewhat cynical about life and her place in the world. Augustus Walters is a 17-year old interminably good looking ex-basketball jock who also happens to be smart and sassy, who lost his leg to cancer. The two meet at the local support group, hit it off and gradually Augustus’s positive world view starts to rub off on Hazel. They have a shared love for An Imperial Affliction, a book about a teenage cancer victim who dies abruptly leaving the ending up in the air. It was written by a retired author now living in Amsterdam and a big part of the story sees the two teens travelling to meet him to learn what happened to the book’s characters (An Imperial Affliction is a metaphor for The Fault in Our Stars’ protagonists and their yearning for something meaningful in a world that seems and often ends uncaringly).

I won’t spoil any more of this wonderfully written novel. John Green deserves the praise—this is a literary achievement, something much more than the average YA contemporary romance. It seethes with pathos. It’s sad, fast and funny. The characters are well developed and incredibly engaging. It’s a celebration of living for the here and now, because you never know how long it’s going to last. I found it hard to put down.

I guessed two of the major plot points—they weren’t telegraphed at all, but I knew they would happen (and no, I hadn’t seen the movie or read any spoilers), so I guess in some way perhaps those two elements bordered on cliché (or perhaps I’m just good at prediction). But other than that, this book was like a breath of fresh air (and that’s not a pun about Hazel’s lungs).

If you like tragic romance, you’ll love this. To paraphrase a line from the book: reading The Fault in Our Stars is “a privilege to have my heart broken by you.”

8 thoughts on “The Fault in Our Stars. A book review.”