Okay, so you saw the trailers and it looked interesting. Maybe you were interested enough to stream the original 1982 Blade Runner (actually one of the four director’s cuts, because the original with the horrible Harrison Ford voiceover is long gone). Maybe you read the fauning reviews or glanced at the positive score on Rotten Tomatoes. Director Denis Villeneuve (who previously directed the brilliant Arrival) has made a methodical, smart, and visually spectacular film. Blade Runner 2049 is a superior sequel that stands on its own as a great movie.

A lot has happened in the 30 Years since the last film, and the old school tech has evolved along with the replicants, which are now used everywhere as slave labour (previously they were only used offworld). Ryan Gosling is K, a replicant blade runner who discovers a secret while hunting an old Nexus 8 (same as the ones in the first movie), a secret that could change the balance of power in the world and leads K to question his own reality. The first act is a noir-style detective story, as K slowly puts the pieces together. And that’s about as much as I can say without spoiling the movie. And this is one film you don’t want spoiled.

Blade Runner 2049 is dark and it’s looong. It’s a thinking person’s flick with some cool action sequences, but it’s a slow burn the rest of the way. 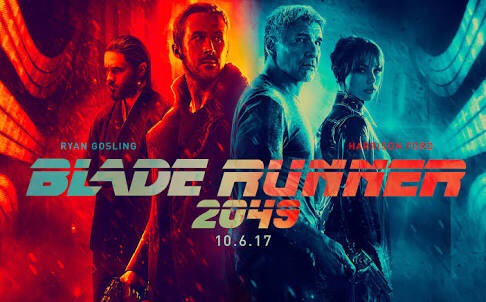 You know from the trailers that Harrison Ford is back as Rick Deckard, giving his best performance in years. Gosling is fantastic as K, and Jared Leto is a standout as Wallace, a blind and weirdly charismatic multi-billionaire who recreated replicant technology after the original Tyrell Corporation went bust. Robin Wright is K’s hard-nosed police captain, Sylvia Hoeks is Wallace’s violent right hand. Everyone in this film is good.

The script is layered, includes lots of throwbacks to the original movie, and no knowledge of the first Blade Runner is required to understand the story. Set design and an emphasis on practical effects really help to capture the feel of the original film. The music by Hans Zimmer and Benjamin Wallfisch is coolly reminiscent of Vangelis’ original soundtrack.

Who would have thought that a sequel to an 80’s movie could be so good (even if it does drag a little in parts). If you like an intelligent sci-fi movie that poses interesting philosophical questions about the nature of humanity, rock solid performances and a great story, then Blade Runner 2049 will be right up your blood and rain-soaked alley.